Unfortunately nowadays hundreds of businesses and brands are getting scammed by influencers with fake followers and fake likes on their profile. HypeAuditor and IG Audit are two of the best tools to analyze any Instagram account for fake followers and engagements.

Someone who doesn’t know too much about Instagram is easily going to be tricked into buying a shoutout off a fake influencer. HypeAuditor and IG Audit are platforms help you spot fake influencers. So, you don’t get scammed out of your money when you buy shoutouts and ads.

Now in this article, we are going to give you a few tips and pointers that are gonna help you steer clear from these annoying shady people that steal money from businesses and brands and even individuals by lying to them about their followers. Let’s get started.

The first thing you want to do when thinking about buying from an influencer is you want to check their engagement. But what does it mean?

If it’s a comment like cool or awesome or dope or just a smiley face, most of the time they’re automated comments from BOTS. And even when the comments look real and they’re related to the post you’ve got to check what kind of page is coming from.

If it’s coming from another page that’s trying to grow on Instagram which has potentially a large following, it’s highly possible that this comment is coming from an engagement group. This means that someone is sharing the post into a specific group and they were trying to help each other grow by commenting on each other’s posts.

Therefore, they’re not necessarily a genuine follower. One of the best things you want to see in the comments section is someone tagging their friends. I think this is the best way to spot natural authentic engagement.

Also, if you have a just quick scroll to the likes and you see that a lot of them don’t actually have a profile picture it’s because again they’re most likely fake Instagram profiles.

Sometimes you can also tell by the usernames because they’re just completely random things but make sure you check the engagement and that’s the comments and the likes.

Now, if an influencer reaches out to you and asks you if you want to buy a shout out of them, you should not work with these people at all. First of all, because we just think they are money-hungry people.

Second of all if they’re money hungry to you, it means that they’re not necessarily putting in all the effort on growing their page and engaging with their fans. It’s even possible that they did just by followers to speed up the whole process of being able to have people buy shoutouts off them.

Although Instagram is cracking down on fake influencers’ activity and engagement all that stuff the problem is that it’s still so easy to buy fake likes and fake followers for Instagram.

In this case, we highly suggest not doing it especially since Instagram is cracking down on. It is highly possible that you’ll get your account banned but there are still people who managed to buy it and get the fake followers in the profile and scam people out of their money which it frustrates them a lot.

If you want to avoid getting scammed by fake Instagram influencers, we suggest something called HypeAuditor or IG Audit. These audit tools provide an in-depth analysis of any Instagram account by detecting fake followers and likes. It’s quite essential for brands to be aware of the Instagram account’s quality before launching an influencer marketing campaign.

HypeAuditor vs. IG Audit – a comparison of two Audit Tools

After confirming your email address, HypeAuditor will bring you to your dashboard with one free credit. So, that was enough for us to test this audit tool.

As mentioned before IG Audit is completely free and there is no need to create an account.

By using HypeAuditor, you get an advantage as a brand by getting familiar with the influencer’s audience and activity upfront and make the following conclusion. HypeAuditor analyses the demography of the Instagram user’s audience by country, city, and language and calculates Engagement Rate (ER).

Get an in-depth analysis of the quality of the audience and find fake or ghost followers numbers. The report will show the number of real people and influencers, the percentage of mass followers and suspicious accounts.follower

Find out where the blogger’s audience lives and what language they speak. HypeAuditor report shows countries, cities, and states breakdown for the United States.

Engagement Rate (ER) (% of the audience that is engaged with the influencer’s content) compared to ER of similar bloggers. ER ranges with the number of bloggers with the same ER.

Evaluate the percentage of target age group and gender among influencer’s audience. The report will show the percent of each age-gender group and overall split.

Check if the blogger’s comments come from an engaged and loyal audience and were not artificially incentivized.

Organize your influencers and calculate the total quality audience and authentic engagement of bloggers for your next campaign.

IG Audit was built on the belief that authentic brands and influencers should have a way to stand out. For any public profile, IG Audit looks at a random sample of followers. And in about 15 seconds, the platform estimates their real follower ratio using an internal classification algorithm. Here we are going to look at some of its major features:

The estimated average number of posts by the user’s followers. When this number is far below average, it is a signal of inactive and sometimes fake followers – many fake accounts barely ever post, and accounts that are less active are less likely to see your posts and stories.

The estimated average number of accounts followed by the user’s followers. When this number is far above average, it is a signal of unreachable and sometimes fake followers. Fake accounts follow many more users than real users, and accounts that follow too many users are less likely to see your posts and stories.

The estimated average alphabetic character ratio of the username of the account’s followers. Fake accounts tend to have more numbers and symbols, and fewer letters than real accounts.

By analyzing the follower’s bio text and post captions, IG Audit can often determine which language is spoken. If the displayed languages differ from expected or the platform detects language for a relatively low percentage of profiles, this can be a signal for fraud.

Note: this feature is still in development.

The estimated average likes per post for the user. If this number is below average, it signals a less engaged or inauthentic audience. Similarly, if this number is very far above average, it can also be a signal that the account is purchasing fake likes.

The estimated Like Coefficient of Variation for the user’s posts. This number represents the spread of likes across different posts. If it’s very low – it’s a signal of purchasing fake likes. Often times accounts will buy similar numbers of fake likes on different posts.

The estimated fraction of real, active and reachable followers for the input user. If this number is far below the average, it is a signal of an inauthentic or unreachable audience.

With HypeAuditor, however, it does cost money you can get one free. HypeAuditor’s pricing is coming below:

One the other hand, one of the best things about IG Audit is that it’s completely free.

Now, we are going to show you very quickly a couple of reports and what you get with HypeAuditor and IG Audit. We’re just going to quickly show you what you can get. So, when you type in your username in the top bar, @nature for example.

If you want to be able to get your account audited by HypeAuditor, you have to have over a thousand followers. It basically gives you a score on the engagement. So, here it says that this page’s got a score of eighty-two out of a hundred which is very good.

HypeAuditor shows you the growth after the past few days. You can also see what kind of interest your audience has. You can see the average engagement and it tells you how good it is. And it also tells you the like comment ratio if it’s any good. 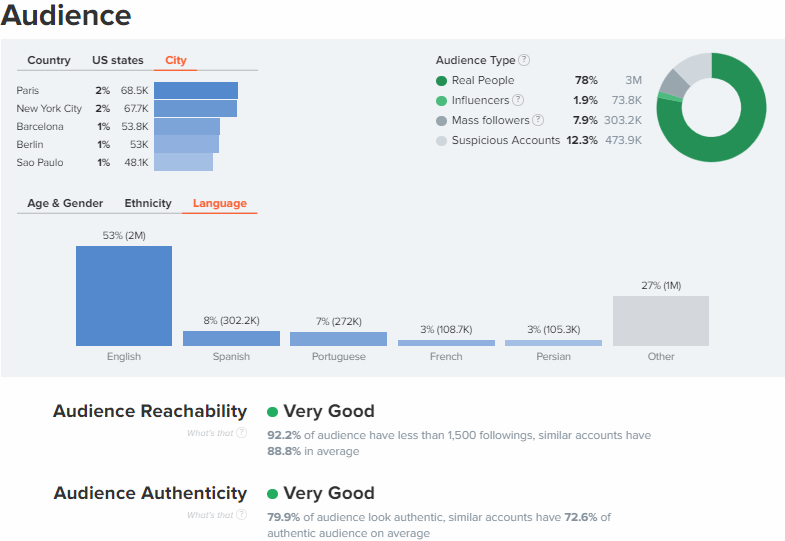 So, with influencers over ten thousand followers, we gonna show you everything else you can get. It shows you what countries and what cities your audience are from. One of the most interesting parts about HypeAuditor is that it shows you the percentage of real followers, suspicious accounts, and then influences. Basically, influencers are people that have over 5,000 followers.

Here you can see that HypeAuditor says this specific page has got 78 percent real people which is really good. It also says there are 12.3% suspicious accounts which aren’t a huge amount. Obviously, some of those are gonna be like bad accounts but some of them are still gonna be real. They just look suspicious and HypeAuditor isn’t like super accurate but yeah you just want to make sure you have less than 20% of suspicious accounts on your influencer’s profile. 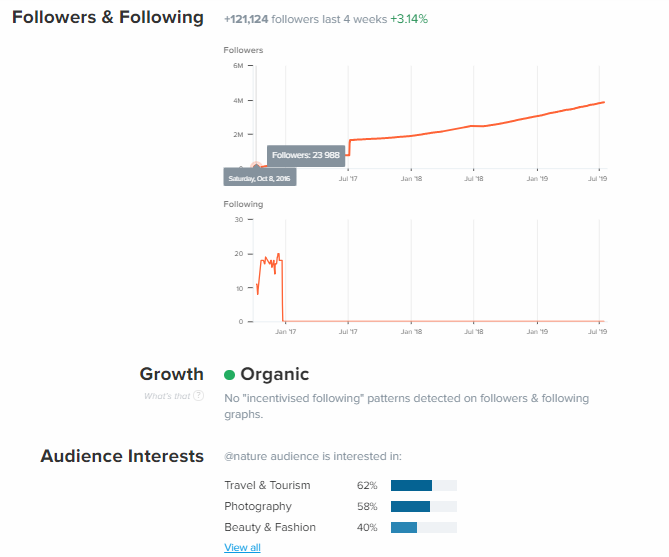 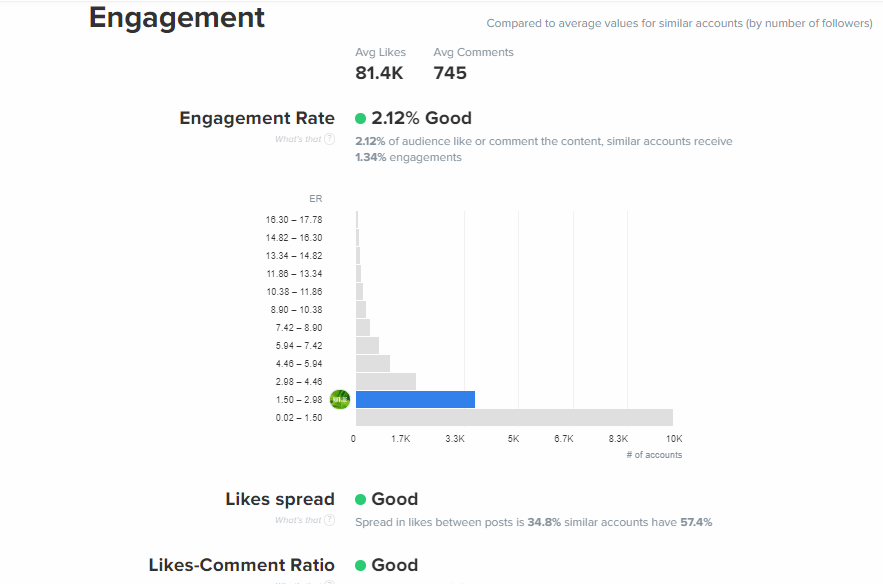 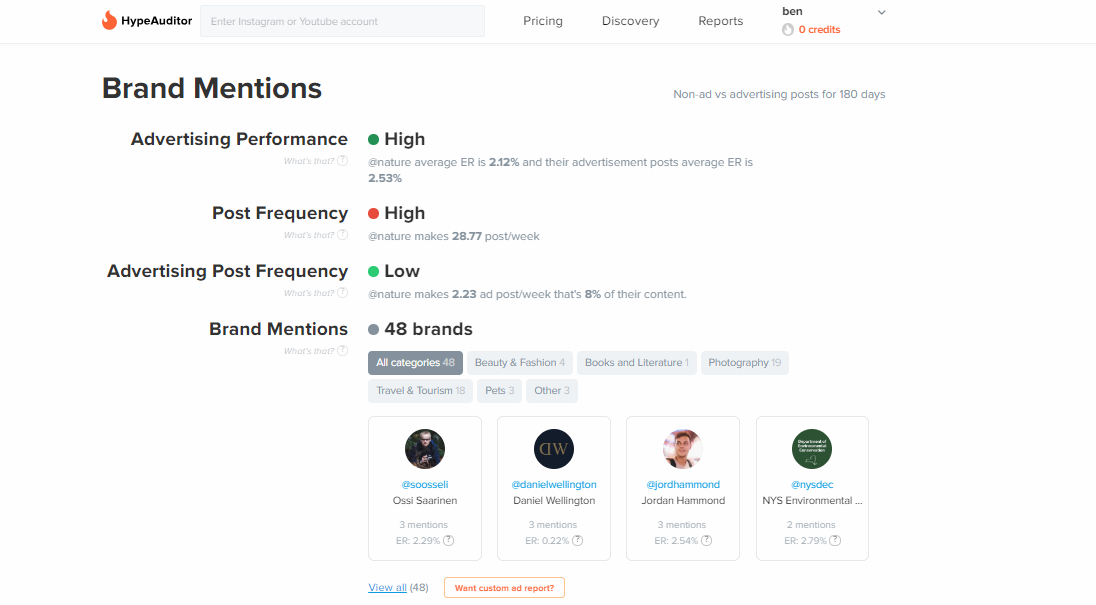 Again it just gives you the engagement rate all that stuff. Then, if you’re planning and working with the influencer, we highly suggest using HyperAuditor. It costs one dollar per report.

IGAudit’s report has fewer sections. For this specific page, @nature, after examining up to 200 random followers, the report is something like this:

After clicking the specified button, your report will be shown like this: 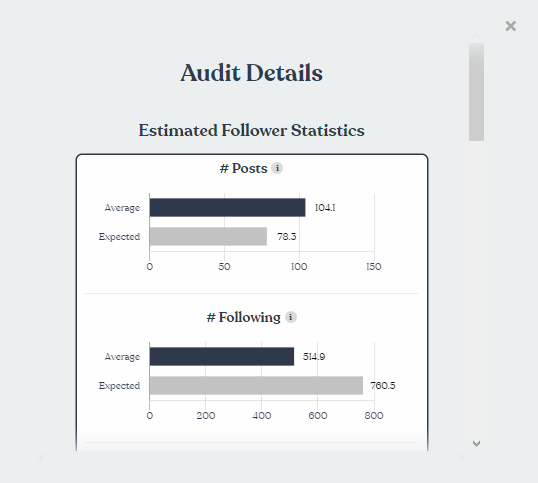 For all sections, if this number is far below the average, it is a signal of an inauthentic or unreachable audience or fake followers. For example, this page’s “Like CV Score” is a bit low. But if it’s very low, it’s a signal of purchasing fake likes. 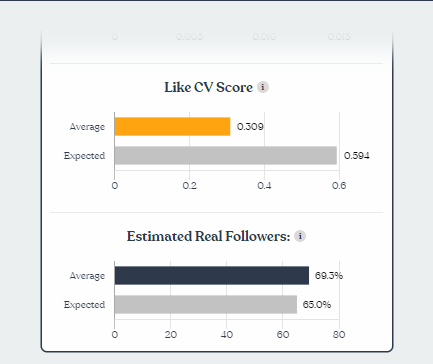 The estimated real followers for this page is about 70 percent which is above the expected number. Also, it’s far above 50 percent and that’s a good sign.

It seems IG Audit and HypeAuditor both are good audit tools. While IG Audit is completely free, HypeAuditor gives you a better view of the specified influencer. With HypeAuditor, the report is more complete and colorful. The graphs make it easier to understand everything about the account. In conclusion, HypeAuditor and IG Audit both are not super accurate auditors but considering their reports as an auxiliary thing will help you spot fake Instagram influencers.

3 Thoughts to “HypeAuditor Has Overtaken IGAudit For FREE In-depth Analysis!”